Historically,  medical errors have been chronically underreported and underdocumented; those judged to be insignificant are normally dismissed with that very same justification. Those errors judged to be worthy of documentation are nonetheless sometimes discarded as doctor, nurses and other hospital employees attempt to distance themselves from any implications of negligence.  As recently as 2004, the Institute of Medicine maintained its estimate of as few as 44,000 deaths per year, in line with prior estimates. A new study from the Journal of Patient Safety suggests otherwise, however. In the study “A New, Evidence-based Estimate of Patient Harms Associated with Hospital Care,” the researcher’s most conservative estimate of otherwise preventable deaths due to hospital error was over 200,000 deaths per year.

With this in mind, we’ve compiled some of the notable medical errors that may be found to be malpractice.

By a significant margin,the most frequent source of negligent errors were in the initial diagnosis of the patient, says a 2010 study by a professor from the Johns Hopkins medical school. Using malpractice payout data from the prior 25 years, professor  Newman-Toker and his team found that well over eighty thousand deaths could be directly attributed to inappropriate diagnosis. Of these, they found that the majority of these mistake were diagnoses that should have been caught, even under the current standards of practice. Under these situations, the doctors, nurses and technicians do, in fact, have all the information necessary to  correctly diagnosis the patient; in other words, all the scans, tests, and interviews were done, but due to inattention, miscommunication, or incompetence, the injuries or illness present were overlooked.

Whether it’s an athlete sitting home, unaware of a clot forming in their brain, or a young child lying in a CT machine, rather than the MRI machine which may be more accurate, diagnostic errors are simply devastating to the patient and their family. They are so overwhelming, in part, because they appear seemingly from nowhere; their damage is done not on an operating table or ambulance, but while the patient is driving home or sitting at work, optimistic that their troubles are over, or at least known. But what should be done to counteract these incidents? Newman-Toker study is distinctly negative in this regard. He notes that he and most of his peers are fully aware that incorrect diagnoses make up the quiet, invisible majority of hospital mistakes, or the “bottom of the iceberg” as the professor phrases it. Unfortunately, the medical community seems slow to address the matter, and as Newman-Toker notes, while hospitals are eager to announce changes in protocol that may be responsible for certain errors–such as incorrect medicine or surgical procedure–they are slower to document diagnostic errors.

The reason for this is fairly obvious, as much of the information needed to improve the medical systems at hand is simply unaesthetic,  and at the very least reflects poorly on the very management, administration and ownership that would be responsible for releasing such data. As such, short of systematic federal or state legislation, victims of medical negligence have to aggressively document their case, and fight for every admission from those involved.

Improper Administration of Medicine and Anesthesia

A patient is told to count down from ten, but before they can reach seven, they slip into unconsciousness as doctor or nurse anesthesiologist administer the pertinent anesthetic. The clinicians and their medications perform their duties daily, in thousands of operating theaters across the country. A common fear of many patients, however is unfortunately realized all too often, as the risks inherent to the sedatives are sharply realized by those unlucky few.

There are a number of different drugs that may be referred to as anesthetics, many of which are administered as adjuncts to either the primary general anesthetic or medical procedures such as intubation. Nor are these drugs necessarily of one or two particular classes; they may range from painkilling opioids to dissociating agents like ketamine.

The general classes of drugs used may include:

While our countries medical professionals, as a whole, do an excellent job of minimizing the vast majority of the dangers  presented by the drugs listed above, the fact remains that they are inherently dangerous, and will remain so for the foreseeable future. It is a simple medical fact that most chemical agents that can induce unconsciousness or significant analgesia suppress bodily function, either by design or necessity. Furthermore,  death rates from general anesthetic are rising, due at least in part to our aging population.

Although the results are often less severe, more general errors in medication affect thousands each day. A 2013  study  reported that the majority (63%) of nurses anonymously reported to have made medication errors of some kind. From that particular study, the errors broke down into the following: 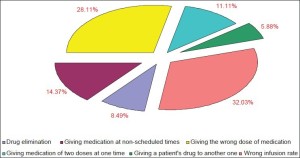 With wrong medication, any of the mistakes listed above can easily cost a patient their health, or even their life. If you, a loved one, or anyone you’re familiar with, you must consult a lawyer immediately. If you or the victim cannot travel, we can meet you at your home, hospital room, or any other location that you find convenient.  If litigation is necessary, we will file a lawsuit in Dallas County District Courthouse located in downtown Dallas, Texas at the George L Allen Sr Courts Building, 600 Commerce St #101 Dallas, Texas.  Mr. Eric Reyes is very familiar with the Dallas County District court system and the judges that work in these courts.  Like all courts, those in Dallas have particular practices that attorneys must adhere to in order to properly present their clients cases in court.  Mr. Reyes has had well over two decades of experience with the Dallas County District court system and will aggressively represent his DFW clients in court.

If you, your relatives, or your friends  have any questions pertaining to your rights in any medical claim,  please call my Dallas Office in Oak Cliff located at 300 Centre St Dallas, Texas 75208, telephone number (214) 389-4900.