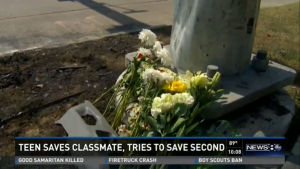 This case illustrates the importance of wearing seatbelts while in a motor vehicle. On July 23, 2015, Plano police reported that a 2002 Chevrolet Tahoe erupted in flames after violently crashing into a traffic signal pole at the intersection of Preston Road at Tennyson Parkway in Plano, Texas in this single car accident. Plano is located in North Dallas County.  Alger Ben Baker, the driver of the vehicle, died at the scene but his passenger Daniel Payton Mushock was rescued from the vehicle before it erupted into flames. Yoel Gebremicael was driving behind the Mr. Baker vehicle when he witnessed the accident. He was able to rescue Mr. Mushock from the vehicle at the scene. Plano police stated that neither the driver nor the passenger were wearing seatbelts. However the good Samaritan, Yoel Gebremicael disagreed . Yoel Gebremicael stated that he had to unbuckle Mr. Mushock while trying to rescue him from the burning vehicle.

As a passenger in the vehicle, Mr. Mushock may have a claim against the driver, Mr. Baker, if the facts show that Mr. Baker’s negligence caused the accident . However, Mr. Baker’s insurance company may try to show that Mr. Mushock’s injuries were caused or aggravated by Mr. Mushock not having a seatbelt on at the time of the impact. Mr Baker’s insurance company may refuse to pay any money to the passenger, Mr Mushock, based on the allegation of non-use of a seatbelt even if Mr Baker was completely at fault for causing the accident. This was not always the law.

Texas has had a twisted history regarding whether judges should admit the non-use of a seatbelt. Before 1974, if a person failed to wear a seatbelt at the time of the accident this was considered admissible in evidence. At this time, if the injured victim was liable for any negligence, he would be barred from receiving any money from the lawsuit. This was considered a harsh result so in 1974, Texas courts ruled that non-use of a seatbelt was inadmissible in evidence. In 1985, the Texas Legislature codified the prohibition on the admissibility of the non-use of seatbelt evidence but then they repealed this law in 2003.

Now with the Nabors decision, a judge can allow the admissibility of non-use of seatbelts to allow a jury to consider whether the injured victim’s failure to wear the seatbelt caused or aggravated the injured victim’s injuries. So an injured victim who was a negligent free passenger in a car accident may be barred from receiving any recovery from the negligent driver if the passenger did not have his seatbelt on at the time of the collision. If a jury finds that the negligent free passenger’s failure to wear a seatbelt was 51% of the cause of the injured victim’s injuries then he will be barred from all recovery. Essentially the Nabor’s decision mandates that there is no distinction between negligence based on conduct (failure to yield right of way) and negligence that causes injury (non-use of seatbelt). It is the opinion of this writer however that the negligent party will probably need medical expert testimony to separate the injuries caused by the motor vehicle collision and the separate injuries that were caused or aggravated by the non-use of seatbelts since this question is outside the knowledge of a lay person juror.

More importantly, in a typical every day case in Texas, an insurance adjuster will try to use the injured victims failure to use seatbelts to reduce the value of the claim in pre-litigation without any medical testimony to guide the adjuster.

A thorough investigation by the lawyer is crucial to protect the rights and remedies of the injured victim in complicated cases involving the non-use of seatbelts in a motor vehicle accident.